Fortum launched its operations in India in September 2012 establishing an office in Delhi. It has been focusing on building its solar portfolio ever since, making significant steps in the business. Fortum focuses in all its operations on sustainability, environment and society.

In June 2018 Fortum signed an agreement to sell a 54% share of its solar power company operating four solar power plants in India to UK Climate Investments (40%) and Elite Alfred Berg (14%). Elite Alfred Berg has the option to buy up to an additional 16% from Fortum. The total capacity of this portfolio is 185 MW. 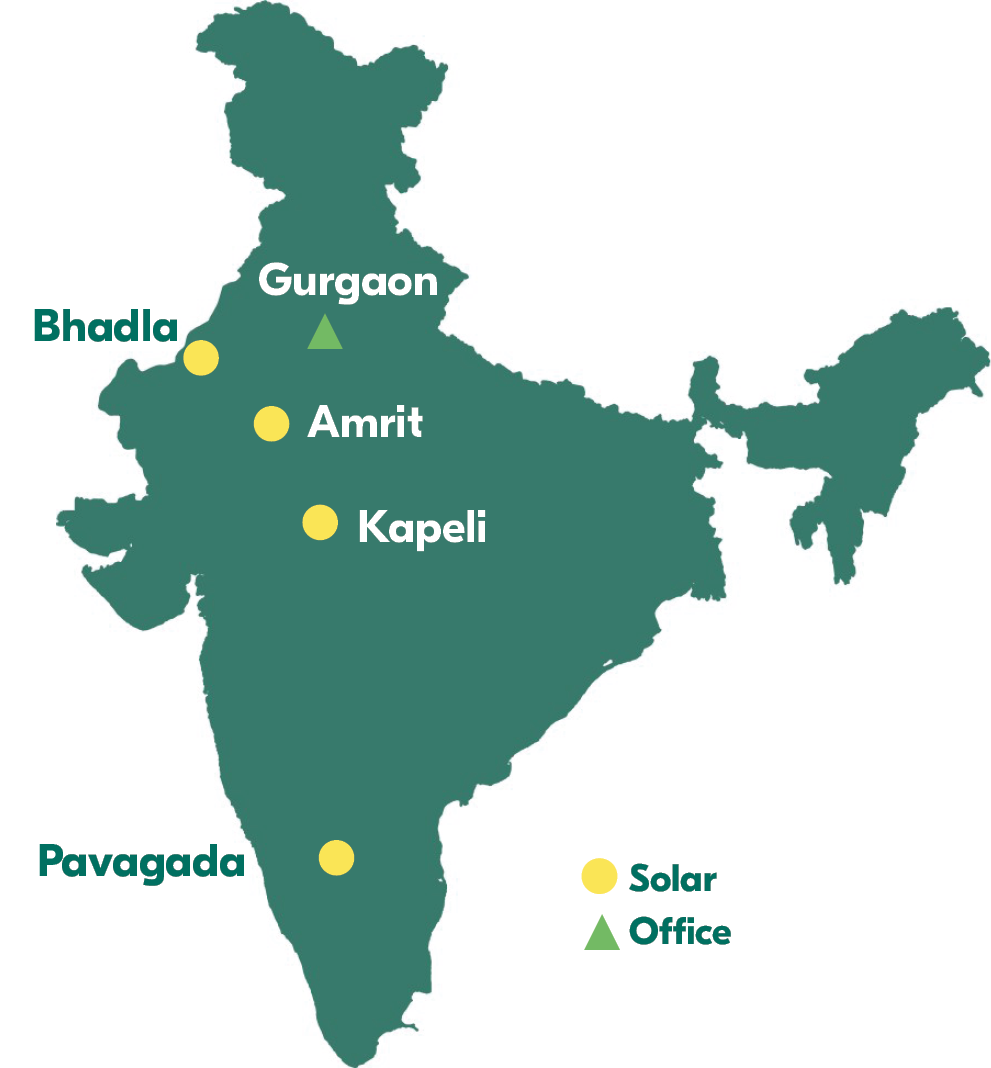 Amrit is Fortum's first power plant in India. It was acquired in 2013. With a nominal peak capacity of 5 megawatt (MWac) and annual production at the level of approx. 9 gigawatt-hours, this plant was constructed as part of the Jawaharlal Nehru National Solar Mission.

Bhadla solar power plant was commissioned in 2017. Its capacity is 70 MWac and annual yield 158 GHh/a.

Pavagada is our newest 100 MW Solar park in Tumkur District in Karnataka, India. It was connected to grid in December 2017. This solar plant is Fortum's fourth, and so far biggest solar energy project built.

In this partnership, Fortum will retain a significant minority ownership in the solar power company and continue to provide operation and maintenance services based on a long-term agreement.

In June 2018, Fortum won the right to build a 250-MW solar power plant in the Pavagada solar park in Karnataka, India. The capital expenditure was approximately EUR 160 million. The plant was fully commissioned by 5 August 2019.

In June 2021, Fortum has signed an agreement to divest the 250-MW Pavagada II and the 250-MW Rajasthan solar power plants in India to Actis, a global infrastructure investment firm.

Right to build 800 MW of new solar power in India

In February 2022, Fortum won the right to build two solar power parks with a total capacity of 600 MW in Karnataka, India. The projects are expected to be commissioned by 2024. For the development of solar-based power generation, Fortum utilises partnerships and other forms of cooperation to maintain an asset-light structure. The solar power parks in Karnataka, India are planned to be developed together with a partner.

In March 2022, Fortum won the right to build a solar project with a total capacity of 200 MW in Gujarat, India. The solar power project in Gujarat, India is planned to be developed together with a partner and the project is expected to be commissioned by 2024.

Social responsibility is important part of Fortum’s operations. In 2014, the company equipped three schools from Bhilwara providing schooling for over 1,200 students with solarpowered infrastructure to meet the schools’ power needs in an efficient and sustainable way. The initiative has bought relief to the students during summers when the temperature rises above 45 degrees Celsius and the region witnesses regular electricity failures. This has significantly increased students’ attendance level reaching 96% from a mere 50%.

Our solutions in India

Get to know our hydro, wind, solar, nuclear and CHP power plants.

Get to know our power plants