Electrification, a powerful drive for change

It wasn’t that many years ago that the old automotive industry seemingly spent much of their time trying to dodge emissions regulations, but today we can actually see that a transformation is underway. Electrification is about to tear personal transportation out of the grasps of fossil fuels.

As road transport is responsible for three quarters of transportation related emissions, in the EU 30 percent of the CO2-emissions stems from transportation, the transition is both necessary and demanding. An electrification of the transport sector would dramatically reduce CO2-emissions in the world. But has to include heavy transports as well. Projects like the electric road outside Sandviken in Sweden, the company Einrides autonomous EV heavy truck, which also is the first of its kind in commercial use, or the electric Freeway in Los Angeles, USA, are all proof of EV heavy transportation, not as a distant futuristic vision, but something on the verge of sector disruption.

Industry is the other main sector that also needs to drastically decrease the emissions. Both in the processes for steel production and cement manufacturing electrification will play an important role to accomplish that.

However, we also do need to transform, decarbonize and create circular systems for CO2 in the energy sector since the environmental performance of the energy system affects almost all other segments. Approximately 40 percent of the world’s electricity production stems from coal and around 20 percent from gas. But the production mix differs a lot between countries. France and Sweden, with their low-carbon energy systems, start from a totally different position than countries such as China and Poland.

There’s no solution that is applicable for all countries, but in many parts of the world solar energy is growing rapidly – and for good reasons. In India it’s yet far from the largest production type, but by a margin it’s already the cheapest source of electricity. The last decades has also shown a huge increase in wind power competitiveness. What remains a challenge though, is the fact that investments in climate-neutral energy production are decreasing – at a time when just the opposite is needed.

IPCC concludes that a massive reduction of CO2-emissions is needed to mitigate climate change. In their main scenario that means massive investments in renewables, in nuclear and in carbon capture and storage technologies. We also need transmission capacity as renewable production benefits from market integration. Between Norway and Great Britain the longest underwater cable in the world is currently under construction. We need more connections and transmission capacity, within countries and between them. My firm belief is that we also need to look into ways of creating circular systems for CO2 in much the same way we do with plastics and metals.

Electrification has proved to change societies before, and now it’s time for electricity to do it again. For us to be able to move the overshoot day forward, the upcoming decades need to about electrification. 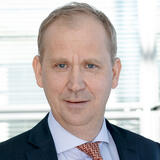