Storage a key towards the future energy system

Wind and solar will become the major form of electricity in the future. As variable energy sources they need several storage solutions that balance the energy system.

Both solar and wind are variable sources, meaning that they fluctuate over time. The good news is that these sources complement each other pretty well. The sun shines in daytime and better during the summer, whereas wind generation is relatively good at night-time and during the winter. But sometimes there isn’t direct availability of either of these sources – that’s when energy storage is needed.

Let’s take a look at the role and developments of some key storage solutions, all of which will actually be needed when we are heading towards the future energy system that is increasingly based on variable energy sources.

One major solution to the fluctuation problem is to use hydro power, which is a flexible, renewable source and abundantly available in the Nordic countries. Hydro electricity can be stored in water reservoirs for a long time, and, on the other hand, hydro power can react quite fast to the changes in electricity demand. If suitable water reservoirs are available, surplus solar or wind power can also be used to pump up water from lower to higher reservoir and then used as hydro power when there is shortage of wind or solar.

Energy can also be stored as heat. Water can be heated and then stored in hot-water storages for a day, a week or even a season. Stored heat can then be used to meet the people’s heating demands. Here the district heating networks and purpose-built heat storages will have an important future role in balancing the energy system. In small scale, many houses already have a hot water storage for domestic use.

Battery storage has developed during recent years almost as fast as solar photovoltaic (PV) technology. During the past decade, the price of Lithium ion (Li-ion) batteries has decreased by more than 80%. It is estimated that it will further decrease by at least 80% by 2050. This means that Li-ion batteries will soon be a competitive technology for short-term electricity storage. This is already the case in Germany, where most residential solar power systems are currently sold with batteries. The fast increase in the number of electric vehicles is also the main driving force behind the battery cost reduction.

On a large scale it has been shown (see Figure 2) that solar power plus battery storage covering most hourly and daily generation fluctuation is already cheaper than spot market electricity in Spain and Italy. For most of the world population who live relatively close to the equator, solar plus battery storage is the ultimate solution because ample solar energy is available every day of the year and storage is needed only for short time periods. (Figure 2)

Fortum is also testing battery storage solutions. Three years ago, Fortum built a Li-ion battery system with 1 MWh nominal capacity and 2 MW power in Järvenpää, Finland. It was the biggest battery storage in the Nordic countries at the time of its commissioning. In 2019, an even bigger battery system, with 6.2 MWh capacity and 5 MW power, started operating in Forshuvud, Sweden. Both of these systems are mainly used for short-term power fluctuations and grid frequency control.

Power to X is the future solution for seasonal storage

People living in the northern latitudes also need a solution for seasonal storage. One answer to long-term electricity storage is conversion and storage, or power to X. For example, when surplus solar or wind power is available, water can be split by electrolysis to oxygen and hydrogen and the latter can be stored for later use. Hydrogen can be further used in fuel cells to generate electricity. Or, it can be methanised with CO2 to synthetic renewable gas and be used later for heating or in existing gas turbines. This way current use of natural gas can eventually be replaced by renewable and CO2-neutral gas.

The technology for power to X is already available and the focus is turning to its competitiveness when used in larger volumes. In addition to hydrogen or gas, the “X” can denote other fuels, chemicals, ammonia, heat, liquids or even food. Especially important are liquid renewable fuels for the transport sector or in remote areas where electric or gas networks do not exist.

As a conclusion, we have several options to store energy: hydro power and heating networks for both long-term storage and flexibility, Li-ion batteries for short-term storage and Power to X as a future solution for long-term storage. In the future, we will see even more alternatives like compressed air (CAES) for electricity storage or ground heat for solar heat storage, or demand response (DSM) for adjusting the imbalance between energy supply and demand.

It is clear that the future energy system will be 100% renewable. The only question is how fast it will be here. In order to get there sooner and avoid the climate disaster, storage will play a key role in enabling solar and wind power to grow much bigger and faster than without storage. 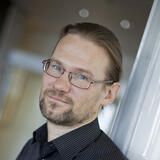 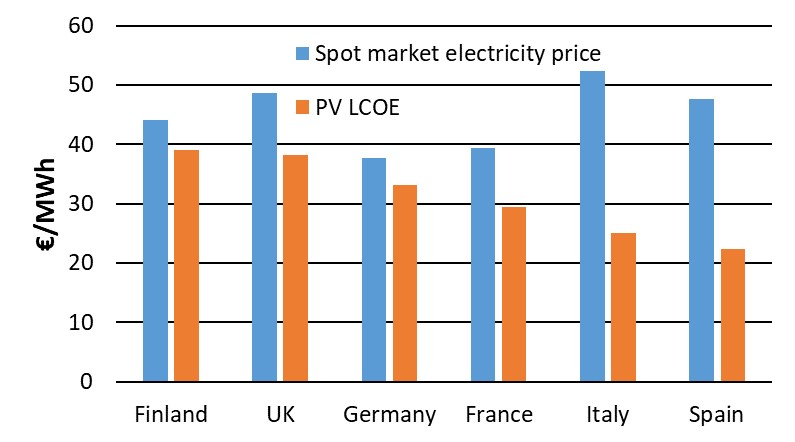 Utility-scale PV LCOE in 2020 in Europe with 7% nominal ranges from 22 €/MWh in Malaga to 39 €/MWh in Helsinki. This is remarkable since the average electricity day-ahead market price in Finland was 44 €/MWh and in Spain 48 €/MWh in 2019. This means that PV is already cheaper than average spot market electricity all over Europe.