We monitor the supply chain while fully phasing out coal

The transition to coal-free energy production happens gradually, as our electrified society requires a secure supply of energy. As long as we still use coal, we are committed to monitoring and promoting the responsibility in the coal supply chain.

At Fortum, we are constantly seeking solutions that enable us to transfer to carbon-neutral energy production. Coal’s share in Fortum’s energy production is already very small – coal accounts for 3% of power generation and 18% of heat production – but we aim to replace even this production by other forms of energy. For example, we will discontinue the use of coal in district heating in Espoo during 2025, and the demolition of the Inkoo power plant – the biggest coal-fired power plant in the Nordic countries - is almost completed.

A change is on the horizon, but we are not quite there yet. Where we still need to use coal, we do our sourcing as efficiently and responsibly as possible.

We purchase coal directly from producers

It is important for us to know the origin of the coal we use, which is why we purchase directly from mining companies. It is easy for us to be open about our supply chain: find information on Fortum’s most significant coal suppliers. The coal we use comes primarily from countries where we operate. In 2019, we used Russian coal in Finland and Polish coal in Poland. The Russian power plants use coal originating from Russia and Kazakhstan.

Coal mining has a considerable impact on the local environment and society. Thus, it is important for us that our suppliers are committed to developing sustainable practices in their operations. We use the Bettercoal Code and tools in monitoring the responsibility of the coal supply chain. By the end of 2020, our goal is to purchase 70% of coal from suppliers whose mines have undergone a Bettercoal site assessment. We have almost reached this goal: in 2019, 66% of our purchases were made from suppliers assessed against the Bettercoal criteria.

Fortum aims to influence the responsibility of mining companies primarily with other energy companies. An individual purchaser has limited power, but together we are well equipped to bring about positive change in our suppliers’ operations. That is why we joined the Bettercoal initiative when it was founded in 2012.

Bettercoal assessments are the most important way for us to learn about the performance and development of our suppliers, as the Bettercoal initiative requires the suppliers to commit to continuous operational improvement. A continuous improvement plan is drafted based on a third-party assessment approved by Bettercoal, and the realisation of the plan is reviewed quarterly.

Most of our coal suppliers have been assessed against the Bettercoal Code. In addition, Fortum participates in Bettercoal’s Russia Working Group which was established in 2018. The purpose of the Russia Working Group is to support Russian suppliers in continuous improvement, increase the number of suppliers participating in the assessment programme, identify country risks as well as find means to address them and develop the dialogue between different stakeholders. The development priorities include, for example, environmental impacts, biodiversity, occupational health and safety and engagement with the local communities affected by mining.

We monitor the supply chain while moving towards carbon neutrality

We strongly support the EU’s climate target of a carbon-neutral EU by 2050. Among many other measures, reaching this goal requires replacing coal with other, lower-emission forms of energy.

For the time being, coal is still needed to ensure secure and affordable energy production, which is why we need to monitor the supply chain. We follow the development of our coal suppliers’ operations and encourage improvement when necessary – while promoting a controlled shift towards a carbon-neutral society. 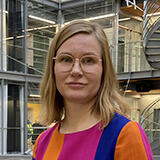