There was a lot happening during the inauguration day in Nyagan. Several press conferences, award ceremony, business seminar and different kind of performances led the day to the evening when the presidents officially inaugurated the plant. Among the approximately 300 guests was for example ministers, mayors, governors, journalists and energy sector decision-makers. The official inauguration was delayed until late evening due to bad weather which caused Putin's plane to be late. 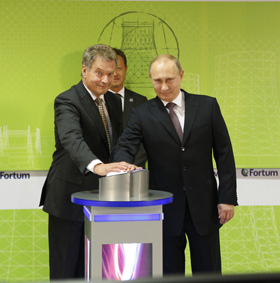 "Nyagan power plant is the largest ever investment from Finland to Russia, and one of the largest of its kind in Russian thermal power generation. We believe it also has the potential to bring significant value for the Russian economy", says Fortum's CFO Markus Rauramo in the press conference and continues: "Today we are producing electricity equaling to the consumption of over 7 million Russian households in our power plants in the Urals and Western Siberia. Russia will play a key role in Fortum's operations also in the future and we are very committed to completing the investment programme. It is an honor to contribute with our energy to the growth and prosperity of our Russian customers."

One of the most energy efficient plants in Russia

Nyagan GRES will consist of three combine-cycle units utilising energy-efficient gas turbine technology. The Nyagan 1 unit’s capacity has been certified to exceed 420 megawats (MW), and it is one of the most energy-efficient units  in Russia. The second of the Nyagan GRES units, Nyagan 2, is currently under testing and is expected to be commissioned by the end of 2013. The Nyagan GRES  unit 3 is planned to be commissioned  at the end of 2014.

The capacity of the whole plant will be 1,250 MW and it is estimated to be completed ahead of the Capacity Supply Agreement (CSA) schedule agreed with the Russian government.

The Nyagan power plant is a unique and challenging project in many ways.The city of Nyagan is located in the North Urals in Khanty-Mansi, about 2,500 kilometres northeast of Moscow, in the middle of the taiga. The Arctic Circle is less than 500 kilometres away. However, the power plant is in a favourable location in terms of the development of the region’s energy system.The temperature varies by as much as 80 degrees Celsius from winter to summer, and the temperature in winter can drop to below –50 degrees.

We estimate the volumes of earthworks to be 6.3 million m3 – 2.5 times the volume of the Great Pyramid in Giza, and the total weight of the metal framework used to build the power plant exceeds 18,000 tons – equivalent to almost three Eiffel Towers. When completed, the plant will produce electricity that equals the annual consumption of about 3.1 million Russian households.