Today, Chairmen and CEOs from six major European energy companies – Centrica,
CEZ, ENGIE, Fortum, Iberdrola, Innogy – representing the Magritte initiative,
gathered at the European Parliament in Strasbourg to call for a higher level of
ambition in the reform of the European carbon market (Emissions Trading Scheme,
“EU ETS”). They organised a public hearing with members of the European
Parliament.

The companies welcomed the ratification of the Paris agreement and its entering
into force before the COP22. This shows once again the leadership of the
European Union in the fight against climate change. The EU must now turn its
long term climate commitments (80-95% of greenhouse gas emission reductions
compared to 1990 by 2050) into concrete measures in order to align the EU ETS
with the objectives agreed in Paris.

The reform proposed by the European Commission, whilst welcome, will not be
sufficient to live up to Europe’s ambitious low-carbon agenda and to secure the
shift to low carbon technologies. A functioning EU ETS is critical to make the
energy transition possible in a cost effective way while providing the private
sector with clear and robust price signals to invest in low carbon and carbon
free technologies.

According to the International Energy Agency (IEA) investments of almost USD
2.5 trillion are required in the EU’s power sector over the period 2015-2040 to
reach its climate goals. The energy sector accounts for almost 60% of
greenhouse gas emissions covered by the EU ETS.

Policymakers must go beyond measures taken so far to strengthen ETS
(“backloading”/ Market Stability Reserve) and the current proposal under
discussion. The negotiations of its “4th phase” (2021-2030) provide a unique
opportunity to fix the European carbon market.

In this context, a combination of short and long term measures to fix the EU
ETS is needed, no single measure being able to do that alone. Therefore, new
initiatives must go beyond the current texts under discussion with the aim of:

-- Strengthening the structure of the carbon market and restoring the
investors’ confidence by providing visibility and predictability;
-- Fostering robust price signals on the market – a significant increase in
CO2 prices is necessary to unlock the full decarbonisation potential of the
power sector in the future.

Measures adopted at EU level should be preferred over uncoordinated national
initiatives that undermine the ETS and disrupt the level-playing field in the
European Union.

These proposals must go hand in hand with efficient carbon leakage provisions
to protect the competitiveness of European industries exposed to international
trade.

Fortum
Fortum is a leading clean energy company which provides its customers with
electricity, heating and cooling as well as smart solutions to improve resource
efficiency. We want to engage our customers and society to join the change for
a cleaner world. We employ some 8,000 professionals in the Nordic and the
Baltic countries, Russia, Poland and India, and already 64% of our electricity
generation is CO2 free. In 2015, our sales were EUR 3.5 billion. (NASDAQ
HELSINKI: FUM1V). www.fortum.com

Magritte Group
Since its launch in May 2013, the Magritte Group has offered its assessment of
the energy and climate situation in Europe. The CEOs of the ten companies that
make up the group aim to contribute to the debate by offering constructive
proposals, in particular concrete solutions to revitalize Europe’s energy and
climate policy. 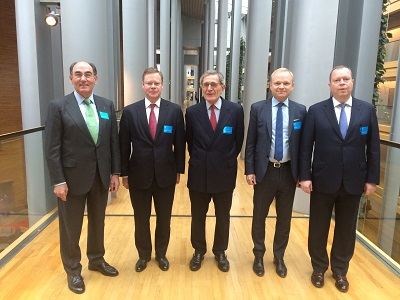