Finland’s first nuclear power plant, unit one of Fortum’s Loviisa power plant, was connected to the national grid exactly 40 years ago, on 8 February 1977, and electricity production for commercial use commenced in May 1977. Unit two was completed about three years later and was connected to the national grid in November 1980. Throughout its history, the Loviisa power plant has produced a total of 288.2 terawatt hours, equivalent to the annual consumption of over 17 million single-family homes heated with electricity.

“The first Finnish nuclear power plant is a result of the combining of Eastern, Western and Finnish technology; the outcome is the Loviisa power plant. The excellent operational history, international-level load factors and outstanding safety record make it verifiably one of the world’s best nuclear power plants in terms of availability,” says Thomas Buddas, Deputy Director, Loviisa Power Plant.

“The Loviisa Power Plant is developed in line with the continuous improvement principle. The plant’s most extensive investment programme ever is currently under way and will secure safe, reliable and profitable electricity production to the end of the units’ operating licenses, i.e. 2027 and 2030,” Buddas continues.

As a producer of clean energy, the Loviisa power plant and carbon-free nuclear power play a significant role in mitigating climate change. The greenhouse gas emissions during nuclear power’s lifecycle are as low as those for wind, hydro and solar power. If the electricity generated by the Loviisa power plant over the course of its operating lifetime would have been generated in a coal condensing plant, about 230 million tonnes of carbon dioxide would have been released into the atmosphere.

During Loviisa power plant’s construction phase in the 1970’s, there were some 3,000 people working on Loviisa’s Hästholmen island. Today about 500 Fortum employees and nearly 100 permanent employees from other companies work at the
plant every day.

Fortum
Fortum is a leading clean-energy company that provides its customers with electricity, heating and cooling as well as smart solutions to improve resource efficiency. We want to engage our customers and society to join the change for a cleaner world. We employ some 8,000 professionals in the Nordic and Baltic countries, Russia, Poland and India, and 62% of our electricity generation is CO2 free. In 2016, our sales were EUR 3.6 billion. Fortum's share is listed on Nasdaq Helsinki. www.fortum.com 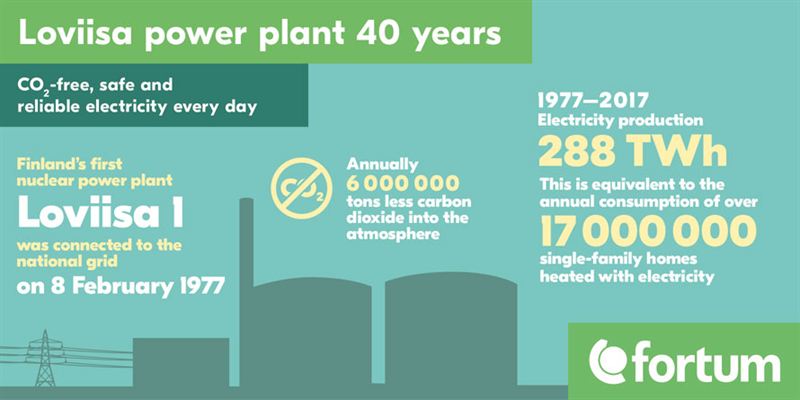