The energy sector is the most important and interesting, right?

Energy transition is one of the most important megatrends of our time, but it's hard to understand due to its massive scale and complexity. Knowing the basics of the energy system helps to take part in the climate discussion.

About three years ago I was thinking about what I should be when I grow up. Bothered by climate anxiety, I wanted to do my part to curb climate change and make it my life’s calling. I wanted to get to the focal point of the challenge – to come up with solutions for emissions reductions that really matter. I landed in the energy sector.

In my initial enthusiasm I devoured information about the energy system and was astonished at how well energy flows could intertwine in the future: for example, clean electricity is cheap in windy weather, so it’s feasible to make hydrogen from water. This clean hydrogen can be mixed with carbon dioxide captured from a waste-to-energy plant’s chimney to make fuel for airplanes, for instance. I was ecstatic: this is exactly what gets me out of bed in the morning!

Without the energy sector, there are no other sectors

I still consider the energy sector as the world’s most important sector. Without the energy sector, there are no other sectors. And without a functioning energy system, we are back in the Stone Age. While it’s a basic prerequisite for our modern everyday life, it’s remote from our everyday thoughts. Even though every energy production form – from hydropower to wind turbines – has its opponents, we all are increasingly dependent on electricity already today. The demand for electricity is predicted to grow at a very fast rate.

After my initial enthusiasm, however, I noticed that communicating about energy is difficult because of its complexity. At the same time, society’s justifiable demand on the energy sector becomes more challenging day by day: “clean up faster, but don’t raise the price of energy!” The challenge is huge, and I contend that its scale hasn’t been completely understood.

Nevertheless, optimism prevails within the sector – solutions do exist; in fact, it’s more a question about the order and pace in which things are done so that it doesn’t become too expensive for society. All energy companies also want to be at the top in the post-transition world.

In the energy sector, it’s of vital importance to understand the scales. Whether talking about megawatts, gigawatts, or terawatts, it makes a difference. It costs about one million euros to construct one megawatt of wind power in Finland. The capacity of Fortum’s Loviisa nuclear power plant is just over 1,000 megawatts, i.e. one gigawatt, and it can produce about 8 terawatt-hours, i.e. 8,000,000 megawatt-hours, a year. So the capacity and the production amounts are two different things, but they are easily mixed up. The amount of electricity used in Finland last year was about ten times the amount produced by Loviisa, i.e. 81 terawatt-hours.

It is also good to understand that each country is in a slightly different situation: many in Central Europe envy Norway’s clean hydropower.

In Germany, the energy transition means that roughly 40% of the current electricity consumption of about 550 terawatt-hours must be produced in some other way, because nuclear power and coal power for the most part will be phased out over the next 10 years.

It’s important to understand some basic things: electricity production must be in balance with consumption at all times. Production must be able to quickly adapt to growing consumption: when people wake up in the morning and the electricity consumption spikes, production has to be adjusted, e.g., by opening hydropower plant gates or by burning more fuel in a plant. It isn’t possible to increase nuclear, wind, or solar power production when the demand spikes.

Eliminating the combustion of fossil fuels as quickly as possible raises a key question: how to get enough of regulating power to balance the moments of high consumption?

So my colleagues and face a big challenge: how to communicate in an understandable and interesting way about the enormous and complex scale of the energy transition without sounding defensive?

We all need energy, but the whole energy system has to change. It isn’t an issue only for energy companies; quick, massive moves require broad commitment from societies: regulations that steer the right course, innovative efforts, and long-term investment prospects. And, perhaps, also acceptance that a wind turbine may be within sight of someone’s holiday property.

The next time you use an electronic device, think about where the electricity comes from and how the entire infrastructure behind it is in an enormous transition. My colleagues and I will try to explain the big picture and the transition to make it as easy to understand as possible also in the years ahead, and we encourage your voice in the discussion. The way I see it, understanding the basics of the energy system is a civic duty.

Sometimes we can be wrong, and we aren’t afraid of our views being challenged. Hopefully, what emerges for all of us is a common picture of how we can transition towards a cleaner world. 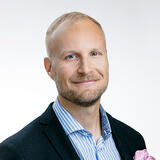