Fortum’s investment in the international energy company Uniper has triggered a debate in Finnish traditional and social media, and there is also a lot of misinformation being spread around. Here are 7 facts for you to know.

1. The goal is to create a leader in Europe’s energy transition

Fortum wants to drive the change towards a cleaner world. Change, however, does not happen overnight, it requires persistence. There are no shortcuts. Alongside wind and solar energy, we need security of supply at all times to ensure the functionality of society. Additionally, we need flexible, adjustable hydropower and gas power to ensure energy availability also when the wind isn’t blowing or the sun isn’t shining.

The energy transition will require significant investments in the coming decades not only in renewables, but also in gas, energy storage, and other flexibility solutions to provide security of supply. At the same time, emissions must be reduced also in industry, transportation, heating, and cooling.

Fortum and Uniper together have sufficient size, expertise, and resources to succeed, to grow and to lead Europe’s energy transition. The companies’ competencies are very complementary, and we have an aggregate EBITDA of approximately EUR 3 billion. This puts us in a strong position to advance the transition and also to capture the growth opportunities it presents.

2. The investment in Uniper is very profitable

Uniper is a profitable company, and Fortum expects a good return on its investment in its Uniper shareholding . At the moment, our shareholding is just under 50 per cent, and we consolidate Uniper as an associated company. In the second quarter this year, we received dividends from Uniper for the first time. Our share of the dividends paid in summer 2019 was EUR 165 million.

As always, this investment follows our investment criteria to add value reflecting carefully managed risks. For Fortum’s shareholders, this transaction means increased earnings per share. Fortum wants to continue paying a stable and over time increasing dividend to its shareholders.

3. Uniper has more hydropower than in all of Finland

Measured in power plant capacity, Uniper is one of Europe’s largest electricity companies, with power plants located in Germany, Russia, Great Britain, Sweden and the Netherlands. The company’s production capacity totals 34 gigawatts, which was used to produce a total of 114 terawatt-hours of electricity last year. The production capacity at Fortum’s power plants is about 14 gigawatts, and we produced about 75 terawatt-hours of electricity last year. Additionally, Fortum is a major producer of district heating – Uniper has virtually no district heating production.

Uniper’s coal power has received the most attention; it accounts for less than 30% of the company’s production. Uniper’s sizeable hydropower production has received far less publicity. The company’s approx. 200 hydropower plants in Sweden and Germany have a combined capacity of 3.6 gigawatts. This is more than the capacity of all the hydropower plants in Finland (3.2 GW). Hydropower plays a key role in climate change mitigation because it is used to offset fluctuations in wind and solar power production. Hydropower is very valuable to own because it’s virtually impossible to build more of it. In Sweden, Uniper has also shares in nuclear power plants.

Uniper has a lot of gas-fired power plants in Central Europe and Russia. They account for over half of the total capacity of Uniper’s power plants. Gas-based energy production is in a central position, as coal is being discontinued and Germany is decommissioning nuclear power plants in 2022. Gas ensures that the lights can remain on in homes and that people have heating until the markets have a sufficient amount of renewable energy.

4. Fortum supports the phase out of coal power

We at Fortum strongly support the EU climate target of a carbon-neutral European Union by 2050. Germany’s plan to discontinue the use of coal power by 2038 didn’t come as a surprise to us. We invested in Uniper in spite of coal power, not because of it, and we also factored this into our investment calculations.

Energy companies play a key role as Europe transitions toward emissions-free energy production and carbon-neutrality. The companies equally have a duty to ensure that consumers, communities and industry receive affordably priced energy without compromising the security of supply. Our society is completely dependent on electricity and cannot endure widespread electricity outages.

5. Fortum and Uniper benefit from a price increase in emission allowances

A price increase in emission allowances has a positive impact on the financial results of Uniper and Fortum because it improves the profitability of low-carbon plants. 96 per cent of Fortum’s European electricity production is carbon-free. Also, the emission intensity of Uniper’s electricity production is competitive in Europe compared to the rest of the market. The reason for this is Uniper’s very large gas power plant capacity (18.9 GW), the profitability of which improves with higher emission allowance prices.

Coal power accounts for 18% of Fortum’s and Uniper’s combined (pro forma) production and 2% of sales. 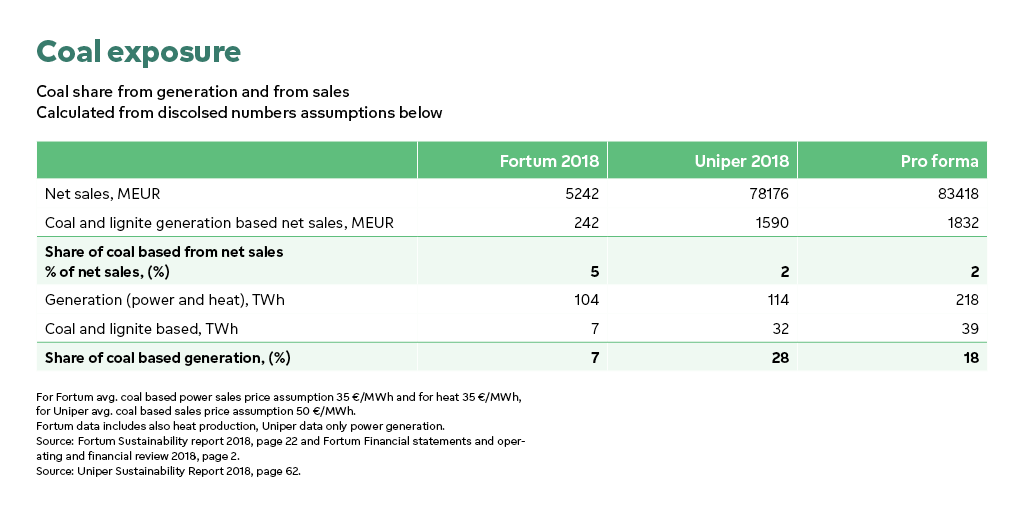 In terms of the climate, gas is the clearly better alternative compared to coal. Emissions from coal-based electricity are about twice, and from lignite-based electricity about three times that of natural gas-based electricity. Increasing the operating hours of underutilised gas power plants is the fastest way to replace coal and lignite. With the price increase in emission allowances, the displacement of coal electricity will decrease the emissions from European electricity production this year alone to about the same level as Finland’s annual emissions.

6. Uniper is negotiating with the German government on the phase-out of coal

Germany has 45 GW of lignite- or coal-based production capacity. Uniper’s share of this is less than 9% (3.8 GW). In May the German Coal Commission published its recommendation on a gradual phase-out of coal by 2038. Germany had already decided on the phase-out of nuclear power by 2022. This means that Germany intends to decommission about half of its electricity production in less than 20 years.

The transition must be done systematically because it is a major societal change. There are only a few major lignite players in Germany, and they are the same companies that also own the coal mines; that’s why the government intends to make separate agreements with the companies regarding the closing of plants and mines. In terms of coal, auctions are likely to be arranged. One of the central open issues is the compensation for energy companies so that they can decide on closings, and, on the other hand, secure future investments in e.g. renewable energy. A legislative proposal is expected later this autumn. Uniper’s management, not Fortum, is negotiating with the German government.

Uniper has the big Datteln 4 coal-fired power plant under construction in Germany, and its commissioning is planned for next year. Many have questioned the opening of the new coal-fired power plant. The German coal phase-out plan defines how much coal-based production can exist in the markets. If it is decided to commission Datteln, an equal amount of older, i.e. less efficient and more polluting, capacity must be decommissioned.

7. The Holland Case is about following international agreements, it’s not about a principled objection of the coal ban

It has been reported in the media that Uniper objects to the coal ban planned in the Netherlands and has commenced legal proceedings against the State of Netherlands. According to media sources, Uniper has not made a decision to sue nor does Uniper object to the phase-out of coal per se; Uniper wants Holland to comply with the international agreement on private property protection if it ends up setting a deadline for coal-fired power production.

The International Energy Charter Treaty protects the rights of companies in the event of unilateral regulatory changes. The Treaty was signed by 53 countries in 1998 and applies to all energy technologies, including renewable as well as coal, gas, and nuclear power. Uniper’s power plant in Holland wasn’t commissioned until 2016, and its design life is several decades. The investment decision on the plant was made in 2007 with cooperation from the Netherlands government at the time.

The energy transition will require sizeable investments in clean energy, including gas. It is important that this transition is fair also to the energy companies that have made investments, trusting that the operating environment will be fairly regulated. If trust doesn’t exist, the companies will not invest and new power plants will not be constructed. The Netherlands government has been unwilling to negotiate on the compensation related to the closing of coal-fired power plants, so a few energy companies – Uniper included – have announced that they want a court ruling on the matter. A lawsuit has not yet been filed, and the decisions in the matter will be made by Uniper.

Pekka Lundmark about coal phase out on Q3 result presentation 2019